Could we add a Category for Characters so I can document the Character creation process? Thx // Khaliban

I'm open to suggestions. Being new here I don't have strong opinions on the organization yet, just on the lack of updated info. -- Khaliban 15:46, 8 February 2013 (UTC)

Could we possibly get a link on this page to the sercodominion.org wiki like the VPR have theirs? that would be fantastic! --Espionage 11:55, 10 July 2012 (UTC)

If anyone has any idea how to use the imagerotate script from the old wiki here, please speak up. --Roguelazer

Oui, this has been added. -Lemming the awesome.

Well we had a rather lenghtly discussion in IRC yesterday and the css was updated to reflect a "centered" format for charts/graphs/tables/etc. I do however see a problem with updating it globally instead of just having it in the code for the table it's self. If you take a look at the "Table of Content" for each page, that small css code alteration has globally f__ked the list, which should be displayed left justified. I'm not sure if there is an easy fix for that, perhaps create a special code for the "ToC", I don't know. But I do think that it's better to have some things in the code then it is to try and anticipate every formating variable and have it pre-implemented in a "global css style sheet". Thoughts?
--Mark McDoogle 15:11, 9 Mar 2005 (CST)

Also, that slight adjustment as altered the way in which "changes" are displayed in the "changes" link in "recent changes"
--Mark McDoogle 15:12, 9 Mar 2005 (CST)

Huh? Both Special:Recentchanges and history work fine here. Are you seeing some sort of bug there? --Roguelazer 19:09, 9 Mar 2005 (CST)

OK, as there are several different places that show various equipment statistics, and several of them are now out-of-sync with each other as stats are being tweaked with each patch, I'm curious if anyone knows if it would be possible to have one centralized place to keep statistics of ships, weapons, etc; and have all the other places that display stats pull the info from the cetralized location.

We'd do that with a Template. Just put the stuff in the template, then include it with curly brackets. Looks like {{template_name}}. If you wanna see an example, look at Template:Badges:playerkills and Badges. --Roguelazer

What happened to the random image page? It still seems to be displaying images, but clicking on it results in a 404. Anybody know what happened? It was working a few days ago. --jdigital 20:18, 28 Apr 2005 (CST)

Hey Tyridum, no offense or anything, but aren't the forums rather redundant? Talk pages allow everything the forums do, plus no additional registration, plus they're associated with their subjects. I for one don't want to have to bother with yapf (yet another phpbb forum) just to handle wiki stuff...
Bah, didn't even notice these. I guess you're right, then. :-D --Tyrdium
Yah, hard to see them, so far away from the article and edit tabs. --Lemming 19:37, 10 May 2005 (CST)

Can anyone guess why this link is PARTICULARLY cool?

I did, glad you like it. It took awhile to remove the background since I forgot to turn off backgrounds ingame, but I think it was worth the time. --Lemming 00:47, 18 August 2006 (EDT)

I've got some nice images for the Main_Page rotator. Care to put them on if you like, otherwise don't worry about it. 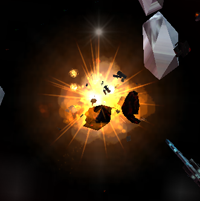 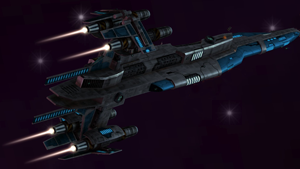 Since we cannot edit the main page directly, it would be nice if one of the sysops/bureaucrats could add a link to the Plug-ins page in the Game's User Interface category. I'd gladly take care of filling that page with information and updating it, but I canna do the link work meself... - Ion 18:20, 18 July 2008 (EDT)

The following links in the "Miscellaneous" section are broken and should be removed:

1. Design Wiki - Devs' plans for the future (of vendetta).

2. VPRpedia - A wiki on pirate activity, maintained by the Vipers.