LeberMac rustled through the lost paperwork and forgotten memories of his past and concocted this story, and he's sticking to it.

LeberMac was born in 4398 about 10 years after the last great Serco incursion into Itani space. Born to an unwed mother in the dirty streets of the City of Angels on Eo, he spent his formative years in a city-run orphanage. City of Angels is ironically one of the most poorly named cities in known space: While most of Eo is idyllic, with prancing bunnies, happy tweeting birds, towering vismetal buildings, lots of sunshine, fresh air, and happy shining people holding hands, City of Angels is the dark megatropolis and industrial hole that does much of the work for the rest of the population.

He grew up in this filthy city, shifting between foster parents, never staying long in any one place, but learning tidbits from each family he stayed with. His technical and piloting skills were recognized by a local wealthy Itani politician and business owner when he was a teenager, but this politician had no use for LeberMac himself. He merely wanted to extract his DNA to enhance his own children's genetic makeup. So for several years, LeberMac spent his life immersed in a genetic cloning vat, concious only for brief periods when they cleaned the vat. The last time he awoke, it was on a cold steel floor of the Ineubis Pelatus Bunker station, deep in grayspace in the godforsaken Pelatus system. It was his 18th birthday.

Being abandoned like a piece of meat forced LeberMac into self-reliance and mistrust of those in power. Determined NOT to die in Pelatus, he struggled to make ends meet by performing various programming tasks for Ineubis Mil-Spec, doing odd advertising jobs for station businesses, and even copiloting small shuttlecraft between the station and the planet's surface. He eventually struck up a small business arrangement with a local Ineubis official in Pelatus, piloting a rented government-issue EC-88 to Bractus and Edras selling custom virus-defense codes in the neighboring systems.

The years passed, and eventually he had built up enough to purchase his own ship. Bidding his former employer farewell, he started to make trade runs back and forth between Divinia and Bractus, slowly amassing wealth, experience, and a pilot's intuition. The number of pilots in known space grew, and pirates started to venture further towards Itani territory, becoming a nuisance in his area of grayspace. One day, when on a multi-run delivery mission between Pelatus and Divinia in his small Wraith, he encountered his first pirate in all his years of trading.

It was a UIT ship, the pilot's callsign was Goldwing. "Hand over your cargo" he said. Of course LeberMac just boosted towards the wormhole like usual, but his intuition told him that this was a more desperate breed of pilot, not really interested in his cargo, but in ending his life for the sport of it. LeberMac jumped to Edras. Goldwing jumped, in his battle-scarred Hornet, and set up pursuit. It was not even close, the Wraith was vaporized with little resistance. "Grayspace is dangerous." was Goldwing's last condescending message.

Spending all of his meager credits on public bounties for Goldwing's head and fruitless searching yielded no Goldwing ever again, as if he had disappeared from the galaxy. Assuming Goldwing had been dispatched by bounty hunters, eventually LeberMac gave up his vendetta, learning to stay away from pirates such as the notorious Martin and Tramshed, and befriended a mystic itani in Jallik by the name of Churin Imami.

Churin took LeberMac under his wing, teaching him the ways of piloting and the methods of navigation and the rules of the spacelanes. Under Imami Alloys, LeberMac profited nicely in traderoutes, mining semi-valuable ores, and built himself up by killing the annoying hive bots that plague the galaxy. Until one day, deep into a delivery in grayspace, he got an urgent communique from Churin: "Meet me in Sedina, we have a fight on our hands." Dropping his cargo and grabbing the most powerful weapons he could equip on his Wraith, he made his way to Sedina.

Once there, he found many itani fighting the pirate Tramshed. Carefully maneuvering his ship, he worked his way in front of the pirate, so that Tramshed's attention zeroed in on him. As the pirate screamed in, firing bursts of neutron fire that tore off huge chunks of his ship, LeberMac closed his eyes and blasted Tramshed point-blank with Jackhammers and Yellowjackets. The pirate's ship vaporized and the explosion sent LeberMac reeling. His first combat kill of another pilot under his belt, he longed for more...

Churin Imami was not seen for some time after the combat incident, but LeberMac continued to trade and earn credits in his quest for success. Without a mentor, he began to look for others that could assist him. LeberMac joined an Itani guild soon afterwards, the Itani Alliance. As a new member, he traded, mined, and worked his way up by killing bots and doing what he was told. But it was another event entirely that changed his life. Some say for the worse, some say for the better.

The day finally came. All of his hard work had paid off and he had finally reached 1 million credits. He was a millionaire! To celebrate, he bought that plot of land on Pelatus III. A million credits will buy a LOT of land on that barren rock, and he knew just where to buy. A lost freighter, the "Pegasus Wind" had crashed somewhere in the Mare Columbia area of the planet, and due to the perceived low value of its cargo, it had never been salvaged. However, there were quiet rumors of valuables on the ship that had been there for hundreds of years. 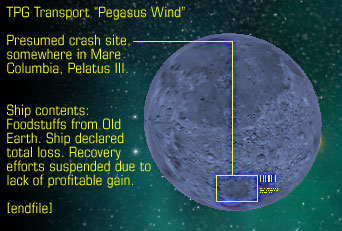 Sure enough, when LeberMac scouted the area, he found the shattered hull of the Pegasus Wind strewn about the crash site, but most of the building-size cargo containers had landed in a deep crater, covered by rock and ice over the intervening years, their insulating and protective layers intact. After cracking the case, he had discovered the old earth tequila that would make him famous galaxy-wide.

The tequila was far superior to anything brewed up by this galaxy's automated bartenders, and he soon began to develop a fondness for the liquor. Emboldened by the tequila, LeberMac began to fight duels in Sedina B-8, to go up against Serco SkyCommand Prometheus pilots in his Centurion, and to, strangely, improve as a combat pilot.

Soon, due to a bureaucratic error, he was promoted to Councilmember in the Itani Alliance. He was a relatively common pilot to see in grayspace until his troubles began, sometimes racing, sometimes defending traders, and sometimes taking the fight to the Serco. However, like most organizations, he was promoted again to his level of incompetence to Lieutenant. After his poor handling of the Mogul Velaio investigation & the subsequent death of Mogul, he was demoted from Lieutenant of the Coalition of Itan, and was quickly expelled by the opportunistic commander.

After his dishonorable discharge from [ITAN], he joined up with The Guild of Free Traders [TGFT]. It was quickly apparent that he was not up for a life of trading, and after several incidents, he was let go. However, he was hounded by Obsidian, whose Collector's Edition pink Axia Wraith he had accidentally crushed whilst on a tequila-fueled docking attempt.

Seeking revenge for his unceremonious sacking, he halfway joined-up, halfway "was coerced-into" taking up with the pirate guild [CLM]. The Cargo Liberation movement was an awkward time for LeberMac, and he eventually decided that hunting down traders and liberating their captive cargo was not for him, either. [CLM] was embarrassed by the entire "Drink More Ovaltine" affair, and LeberMac left [CLM] before his departure could be made more... permanent.

Hiding out from two major guilds, he holed up in Pelatus Bunker, living like a rat, until at last the station managers got wise and irradiated the entire deck he was camped out on. LeberMac sought out refuge inside a clone's shipping capsule, but apparently died in the process and was reborn into the annoying Serco Evangelist known as "Lexicon."

During this period, he was controlled by a group of Serco generals via the remnants of the Neural Spike implant. Using various methods of brainwashing and suggestion, Lexicon was used as a tool on the front lines of the war, preaching the gospel of the imagined Lady Serco. Lacking in support from the main body of Serco for some reason, he thought he had found salvation in the mind of a young Itani child. This child could move multitudes of ships with her mind, so Lexicon kidnapped her, merged her neural DNA with his own, and found he was able to control ships in much the same way. Before he could fully harness his new powers, he was struck down repeatedly by a combined force of the CDC, SSC, SKV and ITAN guilds in Geira Watch.

Before Lexicon could respawn for the last time, the respawning chamber was saturated with tequila and, in a freak cloning accident which destroyed the respawning device, Lexicon and LeberMac BOTH respawned at the same station. In the resulting duel to the death, LeberMac killed Lexicon and ended this sad chapter in Vendetta History, none too soon for some people's tastes.

Soon thereafter, LeberMac was admitted back into [ITAN] for the new year 4435, and through the application of funds gained through questionable means, was able to buy his way into a Lieutenant position.

In a personal mission, LeberMac was last spotted going after the infamous Dr. Lecter (who had the last reserves of blue agave DNA) as that criminal vanished off into The Void. Sadly, LeberMac's food and liquor reserves did not hold out for the extended trip, and he had to return to the galaxy to pursue other interests.

He held a brief position back in his old [ITAN] guild, but soon was tempted to join a new guild, [FEAR], in order to help their cause. Shortly after he joined, [FEAR] disbanded in disarray. Whether this can be blamed on LeberMac is a question Itani politicians will be debating for years to come.

Guildless, LeberMac briefly rejoined [ITAN] for the fifth time and immediately took vacation time for a long vacation away in Pelatus. After consuming a bad batch of tequila, and perhaps being blown up too often and not QUITE being respawned in the correct fashion, LeberMac broke from his loyalist (more or less) Itani ways and has now joined the Cargo Liberation Movement.

Some say he joined because of the free tequila in HQ. Some say he joined to get close to his nemesis, Quirc Taranis. Still others say that he is drawn to Mystic Rogue's massive... leadership qualities. Whatever the reasons, LeberMac has turned to a life of piracy, tanked his standings, and the spacelanes will definitely never be the same. If current events show anything, trade has actually INCREASED in grayspace after LeberMac's involvement with the notorious band of space pirates known as [CLM]. Is it his sloppy piloting and reckless behavior that is making things easier for [TGFT] and their ilk, or is there a more sinister explanation for his motives? Is LeberMac the future-day equivalent of Keyser SÃ¶ze?